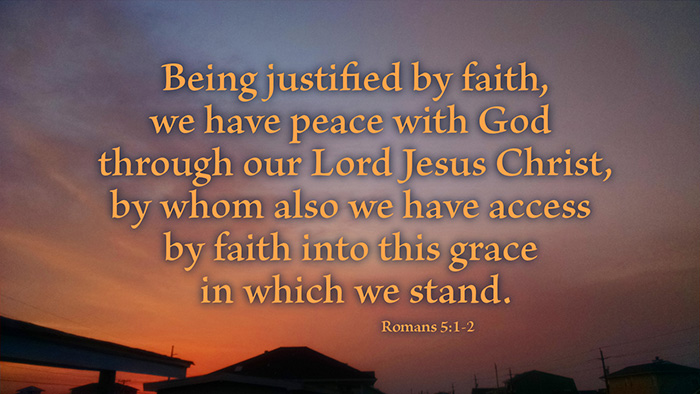 Likewise, Paul says, “Through him we have obtained access” (Rom 5:2), and adds, “by faith.” Thus, we are reconciled to the Father and receive forgiveness of sins when we are comforted with confidence in the mercy promised for Christ's sake. The adversaries regard Christ as mediator and propitiator because he has earned the habit of love. Therefore, they do not urge us to rely upon him as mediator now. Rather, as though Christ were altogether buried, they imagine that we have access through our own works and earn this disposition through them, and by this love come to God. Does this not to bury Christ altogether and remove the entire doctrine of faith? Paul, to the contrary, teaches that we have access, that is, reconciliation, through Christ. To show how this takes place, he adds that we have access by faith. Therefore, we receive forgiveness of sins by faith because of Christ. We cannot set our own love and our own works over against God's wrath.

Pulling It Together: Some people rely on religion as a way to gain peace or go to heaven—or rather, not go to hell. This puts the cart before the horse. Instead, they should be interested in being with God. When they have gained access to God, they will then gain heaven, for that is where God dwells in eternity. If they have gotten into his eternal presence, they will of course therefore, be in heaven. They will also have peace in their consciences and spirits, though not because they are going to heaven. They have this peace because they know that their sins have been forgiven. They know that their sins have been canceled because they believe the promise: that their “sins are forgiven freely for Christ's sake” (Eph 1:7). Only those who believe this, that their sins are remitted through faith in Christ alone, have true peace of conscience and spirit. To the degree that they rely even a little bit on their religion, their works, their morality, or their so-called goodness, to that degree, they lack peace. To that degree, they worry about heaven. But when they know that they have most certainly been forgiven of all their sins, they no longer worry about heaven because they know that they stand in his grace by faith, and rejoice in the hope of the glory of God.

Prayer: Lord Jesus, I trust in you alone as the one who has negotiated my salvation. Amen.

It is a vital task of the church today to encourage a renewed interest in and use of God’s Word. Unfortunately, many people find the Scriptures difficult to read and hard to understand at first. The purpose of Epistles, a Guide to Reading the Scriptures is twofold: to encourage Christians to read God’s Word on a regular basis and to help the reader slow down and concentrate on each chapter of the epistles before moving on to the next.